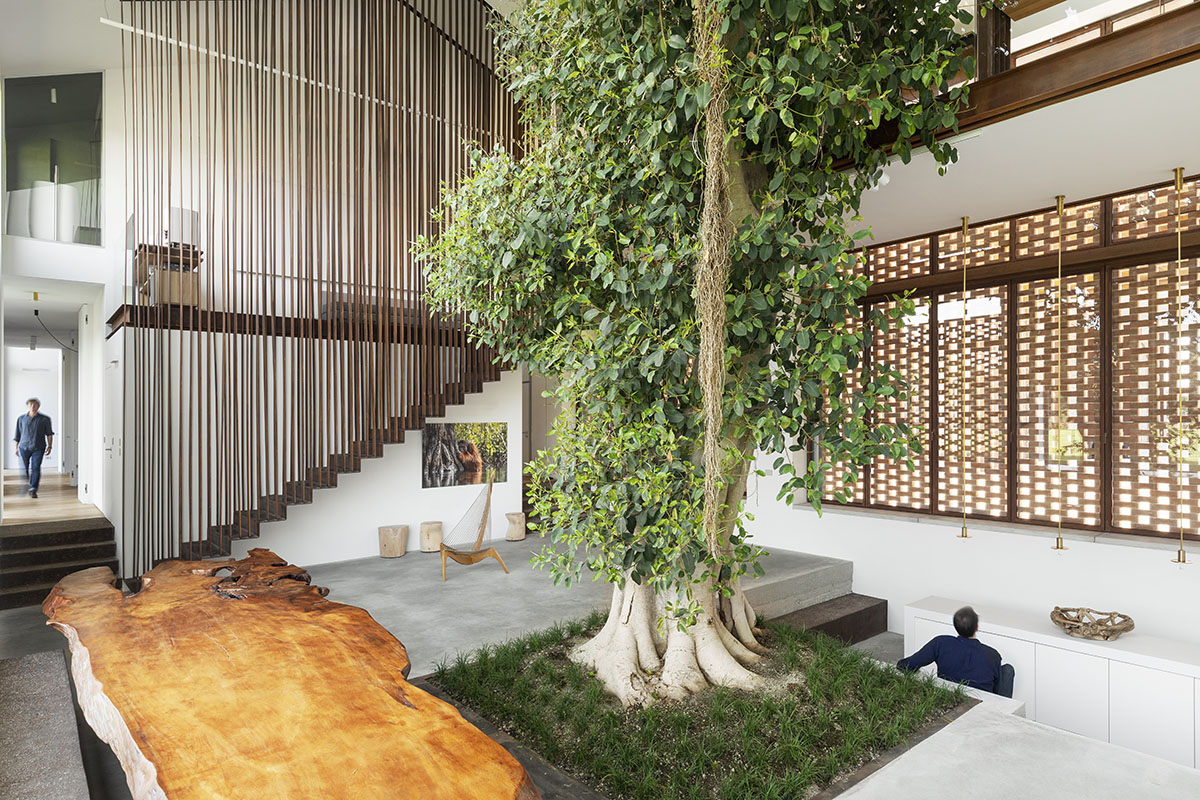 International design and innovation office Carlo Ratti Associati has unveiled the Greenary, a private residence built around a ten-meter-tall ficus tree, located at the center of the living space.

The Greenary, the traditional Italian farmhouse, was redesigned to showcase new approaches to blur the boundaries between the natural and artificial.

CRA first released images for the project in 2018 and it was completed in three years. Multiple living quarters encircle the tree’s leafy branches, all the way up to its top. Commissioned by Francesco Mutti, CEO of Mutti, the European leading producer of tomato-related products, the house is located in the Northern Italian countryside. 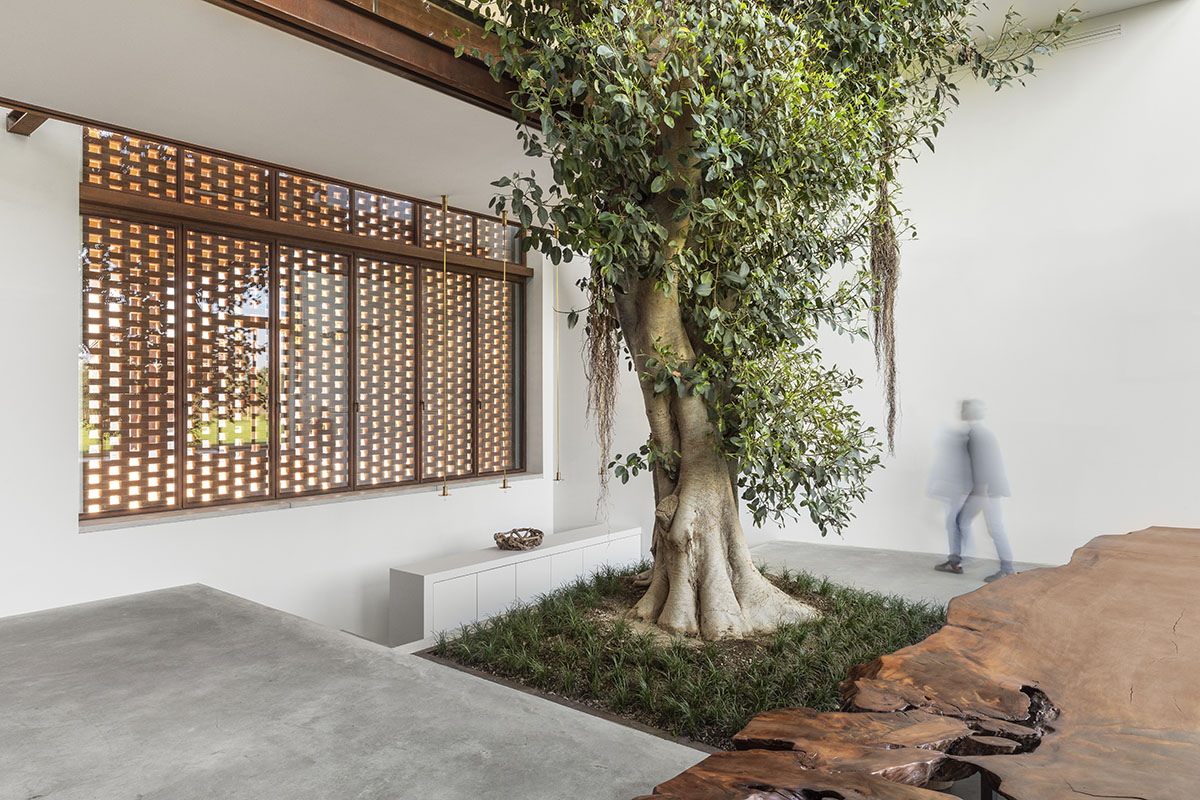 "Built out of a traditional Italian farmhouse outside the city of Parma, the Greenary (a wordplay of “green-granary”) responds to the idea of biophilia, a scientific hypothesis proposed by noted biologist and Harvard professor E.O. Wilson, which suggests that human beings share an innate desire to live close to nature," said Carlo Ratti Associati.

The studio added that "this concept is foremost expressed in the 60-year-old ficus tree named Alma standing in the middle of the living space."

"It belongs to a species called ficus australis that enjoys stable temperatures all year long and is thus well-suited for indoor living conditions. Its close relative ficus religiosa is venerated by Buddhists as the Bodhi tree, under which Siddhartha achieved enlightenment, while ficus microcarpa adorns the ancient parks across Southern China." 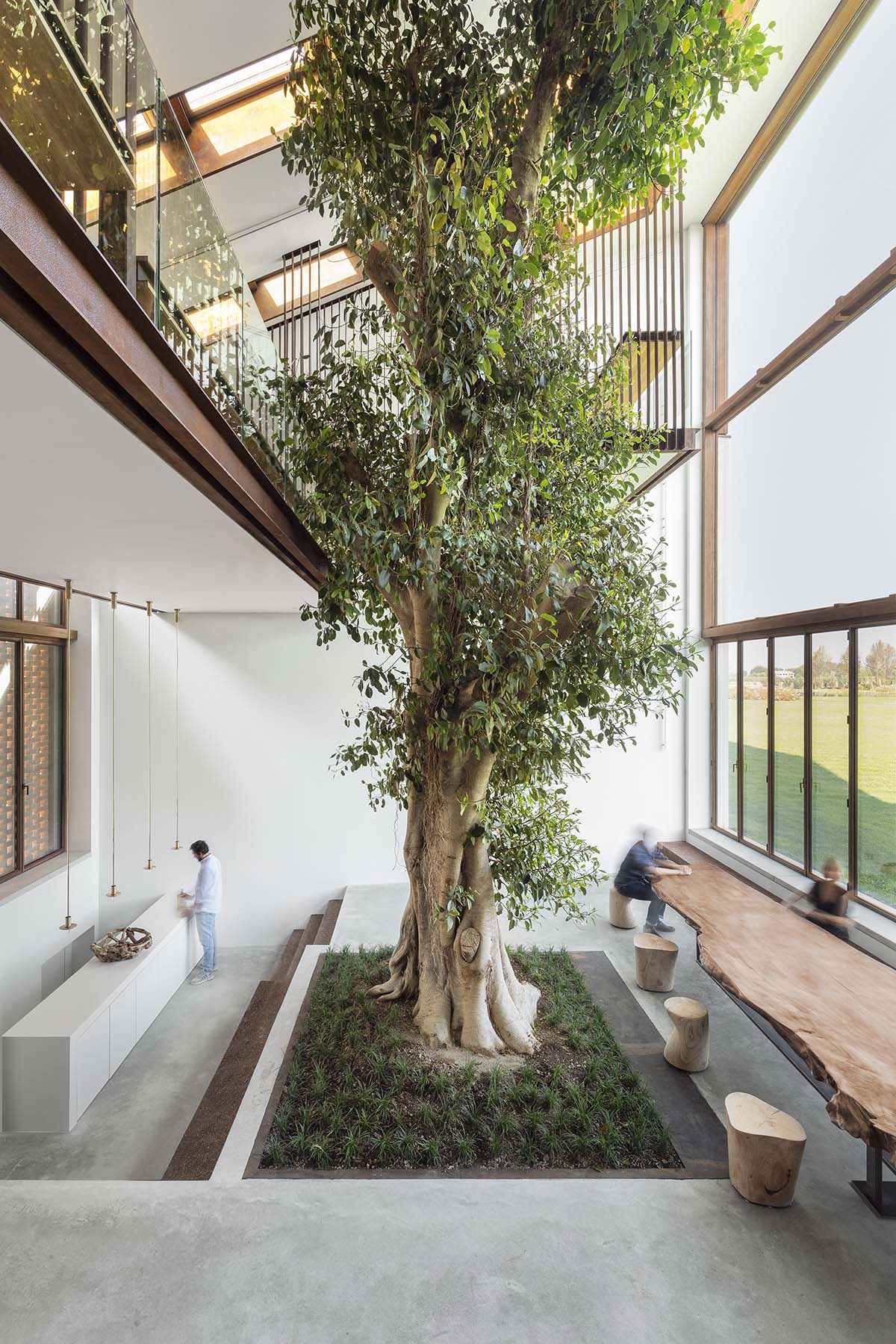 Aiming to create the ideal setting for the tree to thrive, CRA has completely renovated the old farmhouse to maximize natural light, installing a ten-meter-tall, south-facing glass wall. 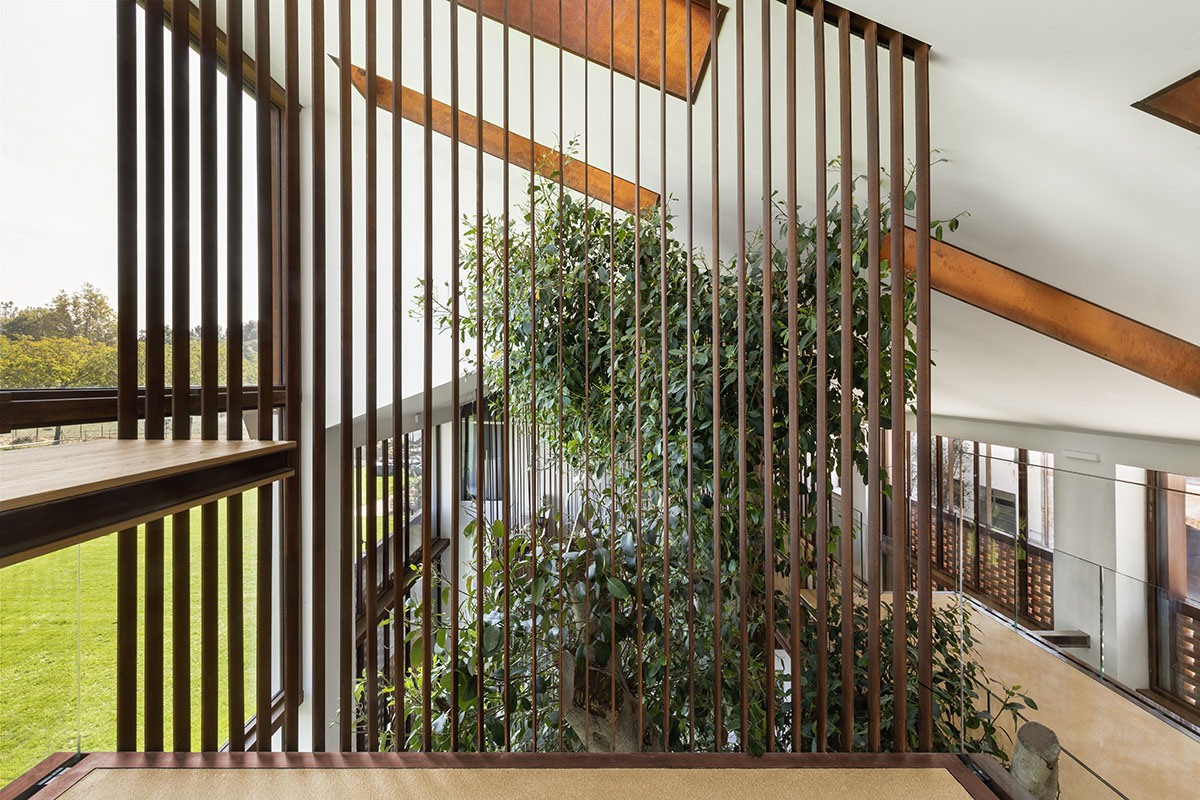 The design is shaped around technology and the micro-climate of the surrounding area to control the temperature and humidity inside, so that the tree and the home’s occupants can live together comfortably.

Both the windows and the roof can be opened and closed automatically to adjust the amount of sunlight and fresh air entering the house. 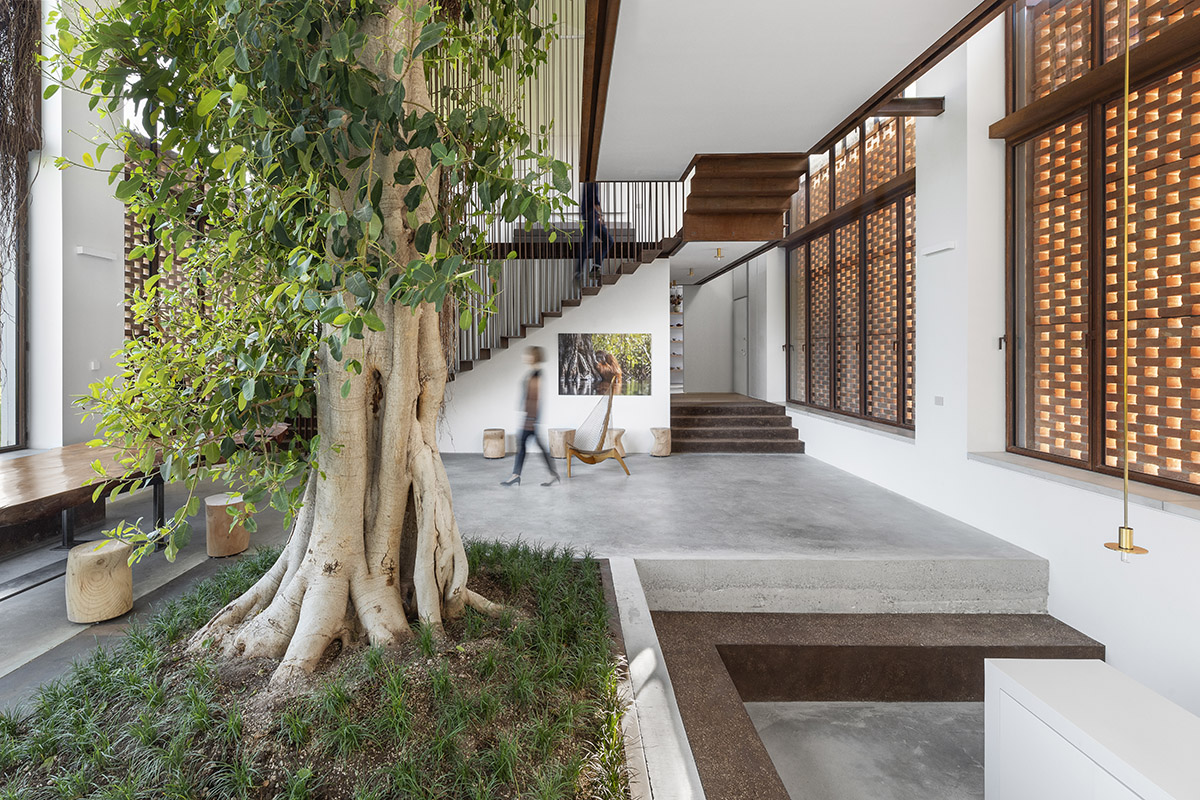 The Greenary contains seven terraced spaces, with three among them above the entrance and three below it.

According to CRA, these dynamic, interconnected rooms reinterpret 20th-century architect Adolf Loos’ principle of the Raumplan – with nature at its core. 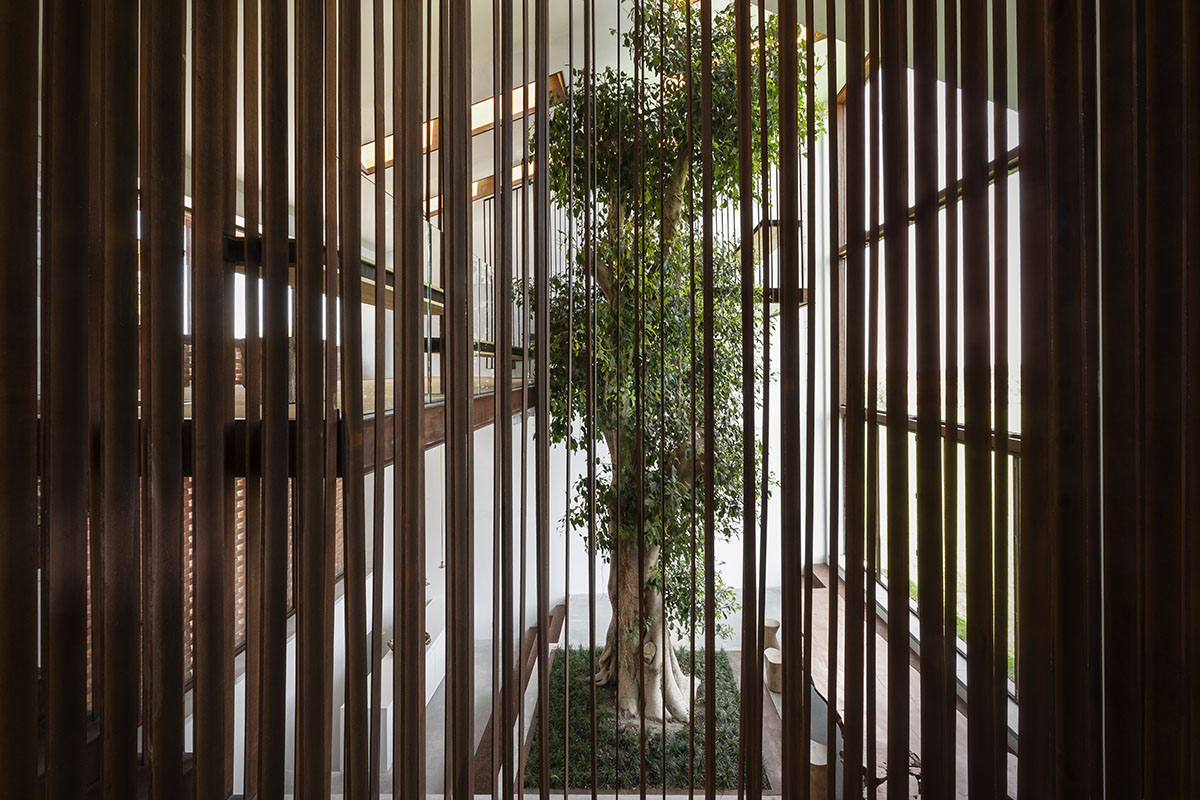 Inside, kitchen and the main living area are placed one meter descend to catch the eye level with the idyllic meadow outside.

To offer a naturally-inspired journey, the other levels of the house were conceived in different levels, throughout which the tree serves as a prominent pillar. Nature is also incorporated in other forms throughout the interior space, such as in flooring that incorporates soil and orange peels.

"The 20th-century Italian architect Carlo Scarpa once said, ‘Between a tree and a house, choose the tree.’ While I resonate with his sentiment, I think we can go a step further and put the two together," said Carlo Ratti, founding partner of CRA and professor at the Massachusetts Institute of Technology.

"Much of CRA’s work focuses on the intersection between the natural and artificial worlds. With the Greenary, we are trying to imagine a new domestic landscape built around nature and its rhythm," he added. Built on a site that spans over 2.5 hectares, apart from the main residential unit, CRA also converted a granary at the back of the house into an office.

Surrounding both buildings, a garden cultivated by renowned landscape designer Paolo Pejrone celebrates the biodiversity of the local region. 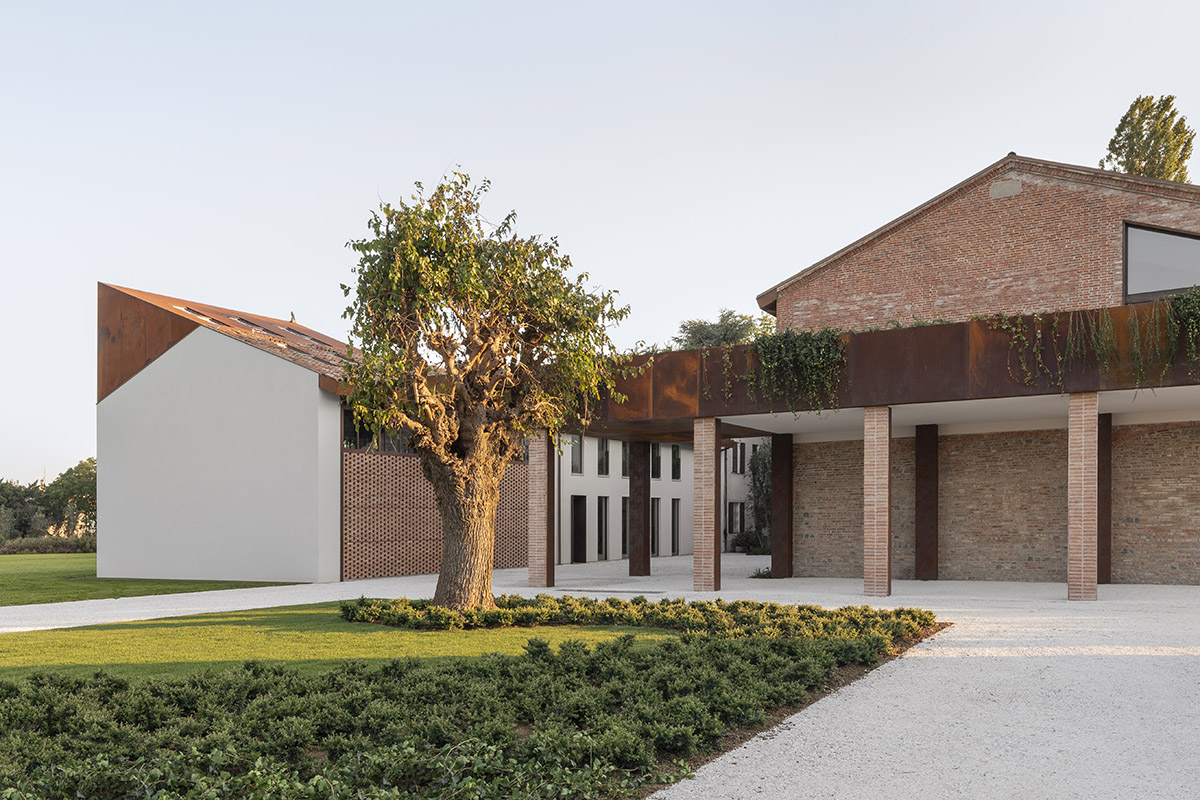 "In a flat landscape in which there are no mountains, hills, or lakes, but only plains, nature expresses itself through a beautiful light that changes throughout the day. It adds a charming, almost film-like quality to the atmosphere," said Italo Rota, director of Italo Rota Building Office.

"The environmental conditions around the Greenary inspired our design, and this represents one of the different expressions we use to illustrate the harmony between natural and artificial elements." 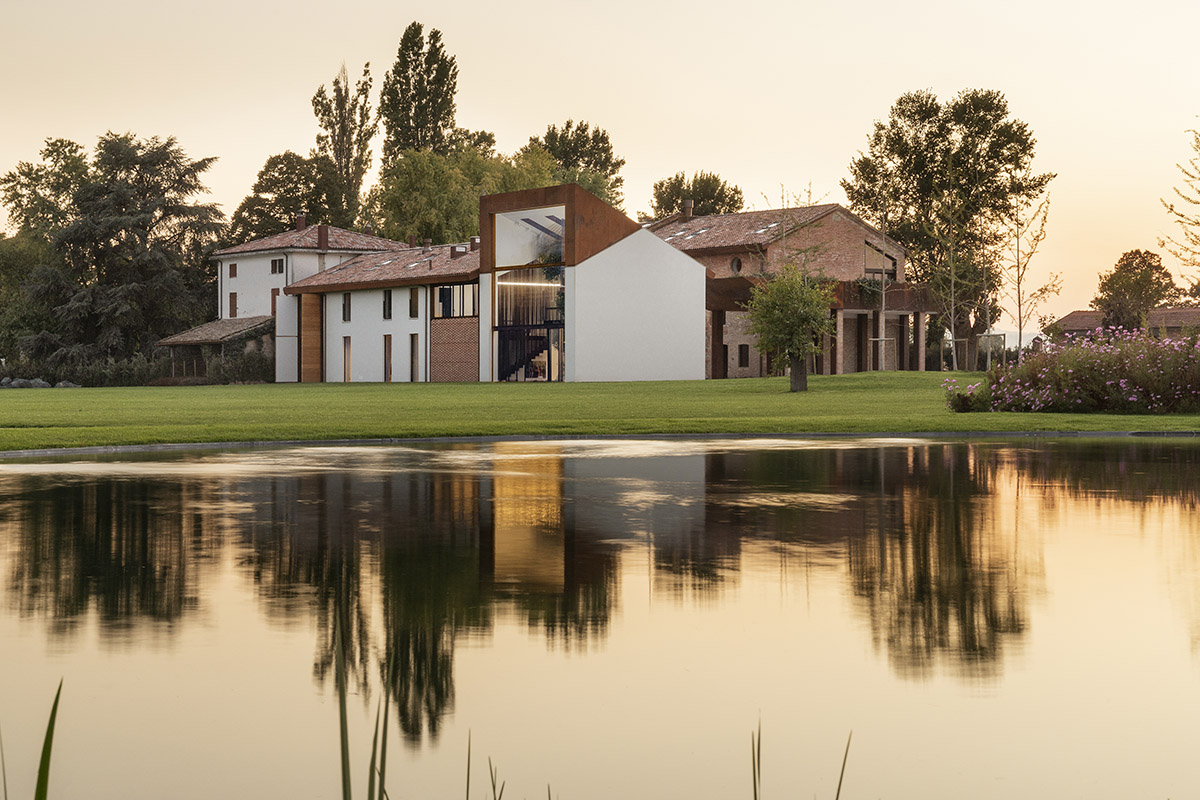 The residence was designed as the first completed component in CRA’s master plan for the area. Other planned buildings include a factory facility and a canteen-restaurant complex.

"Light enters the interior space through the pierced brick wall, corten steel stairs and tree branches. By doing so, it also mingles with the architectural details of the house, and leaves subtle shades all around it," added Andrea Cassi, partner of CRA. 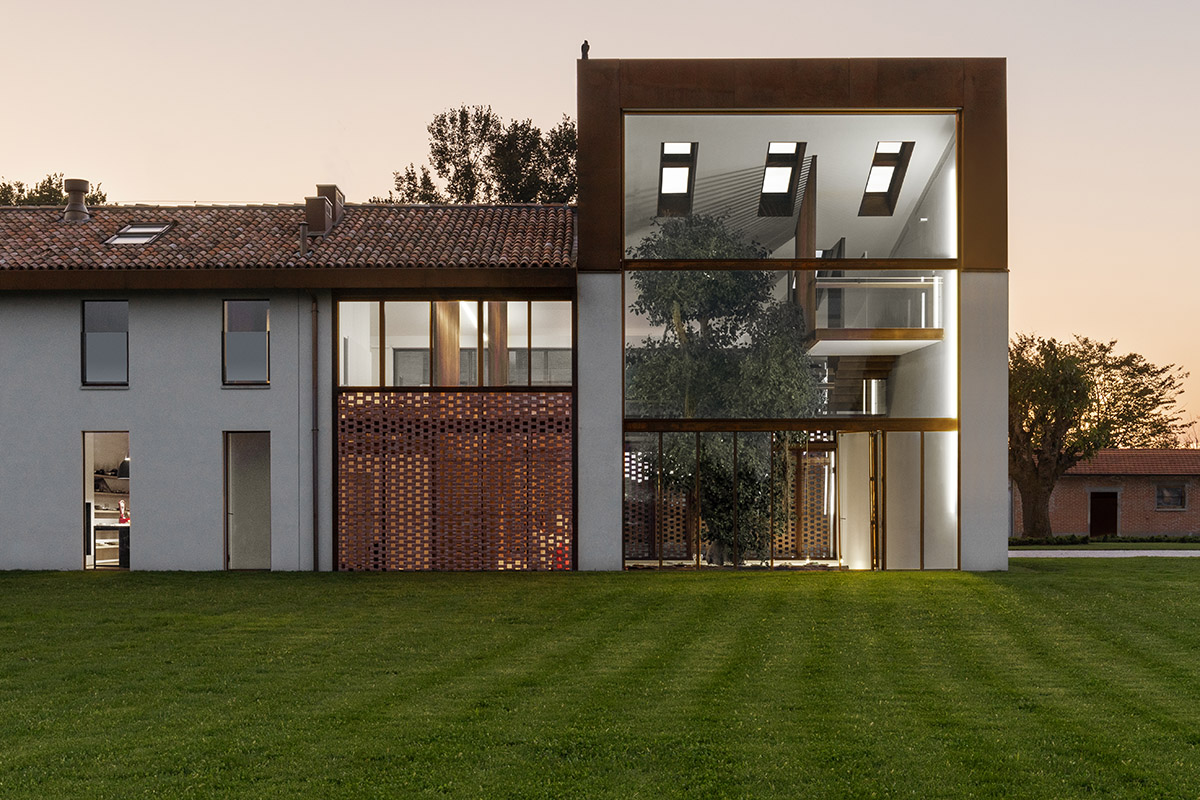 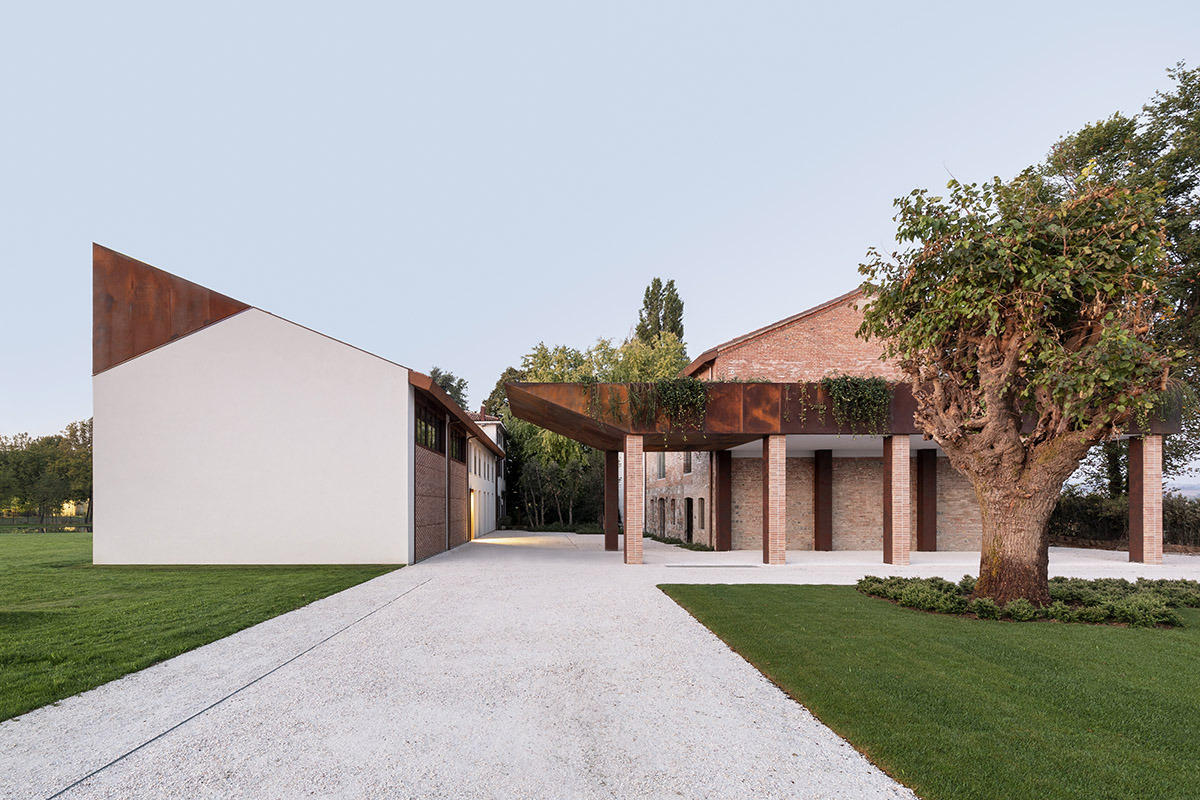 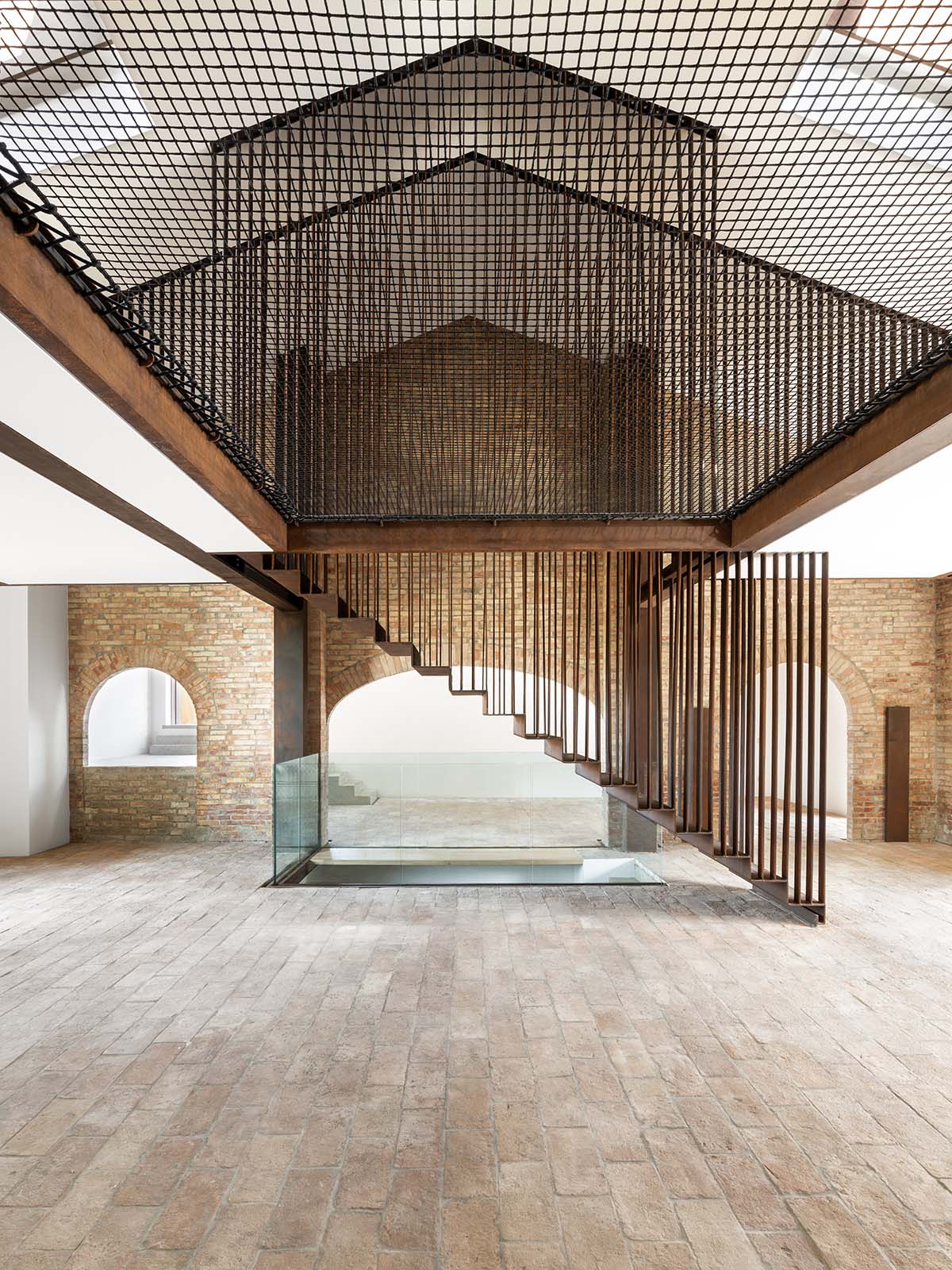 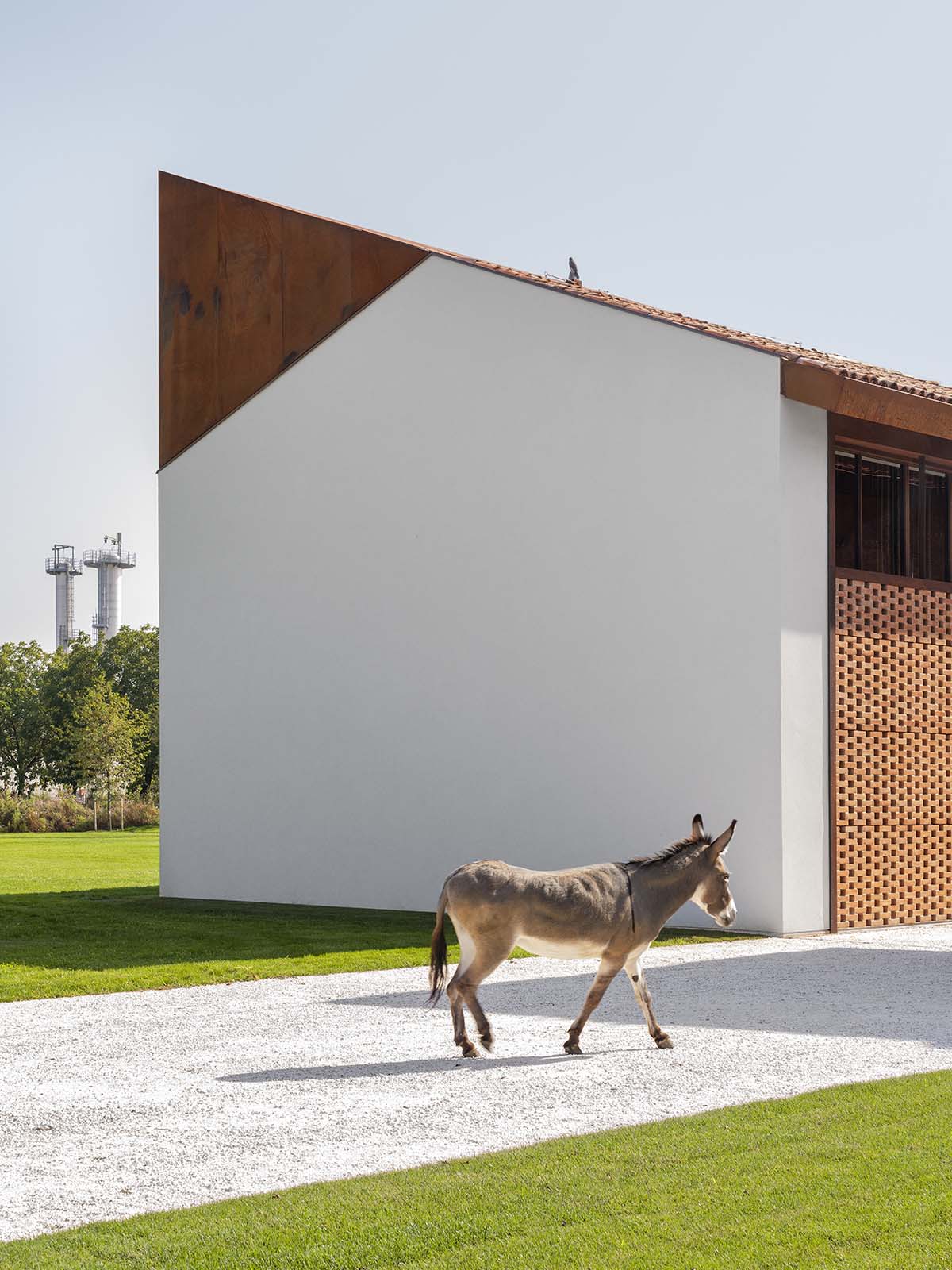 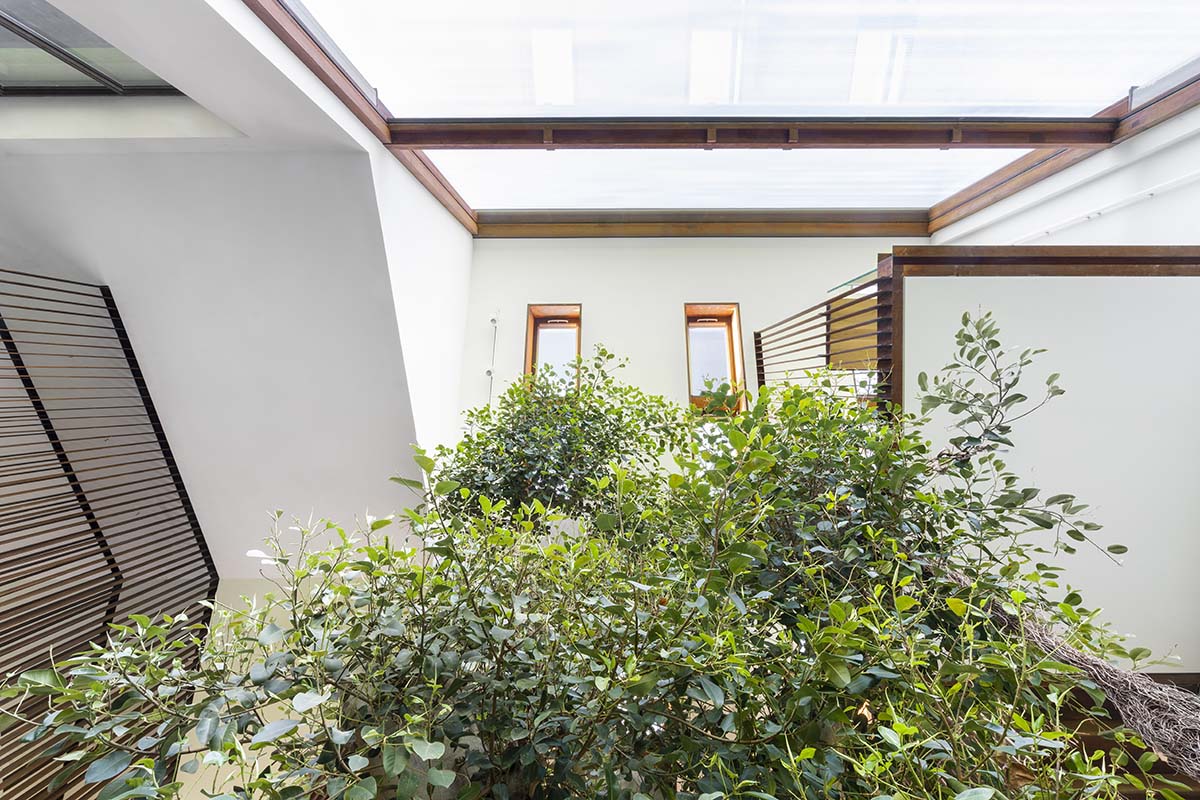 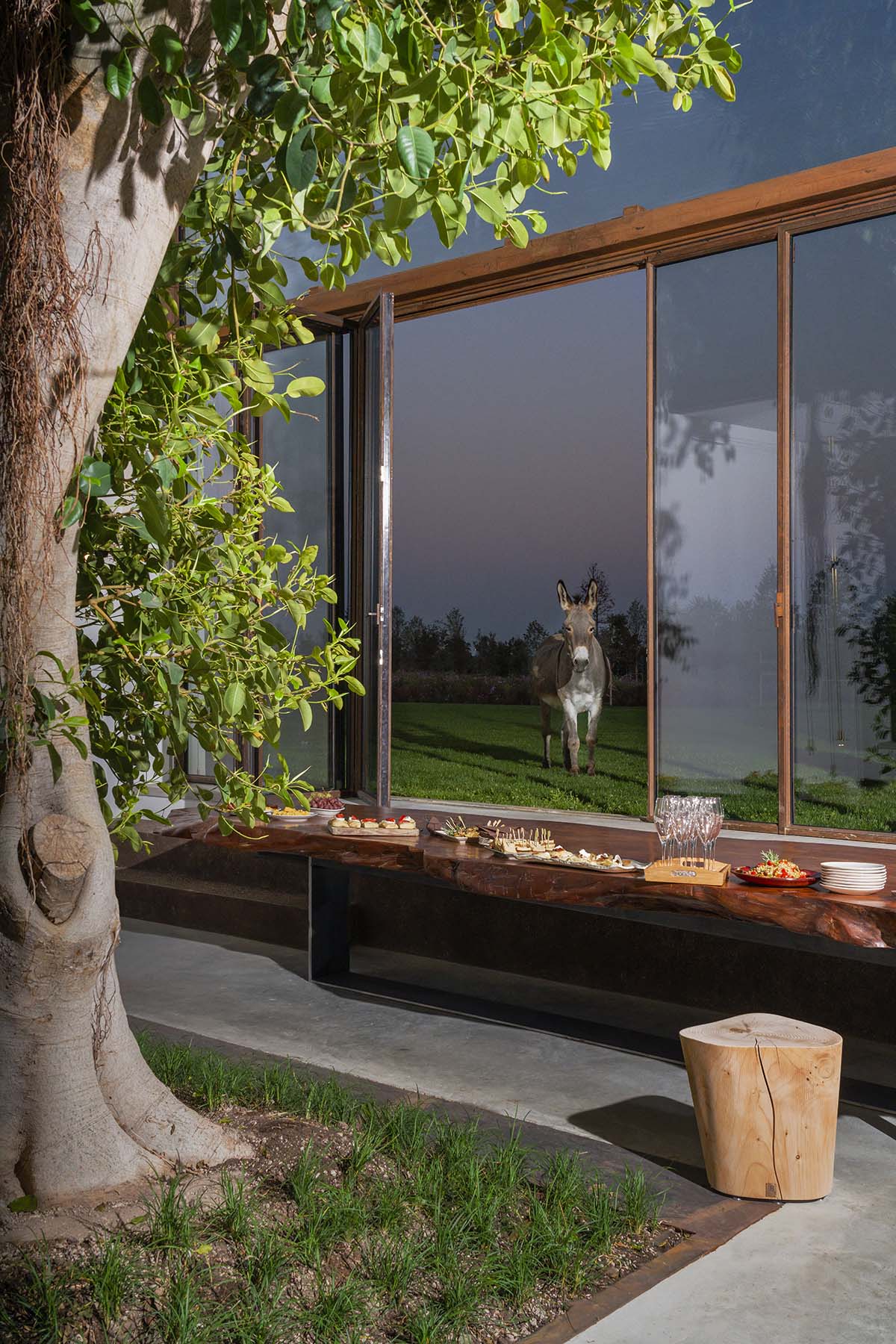 CRA and BIG are also designing CapitaSpring in Singapore, which has a suspended tropical forest at its core. Construction work on the 280-meter-tall tower will soon be completed.