Mapping the vast heritage of India, India lost and found is turning the lens towards the unknown

India being the one of the world’s oldest, grandest and richest civilization has an all – embracing convergence of vast built and cultural heritage. Whichever direction you see, there is history staring you in the face as a decaying ruin. With world’s second largest population, it might be a developing country and we gain certain things going forward, but at what cost? We lose more than we can ever compensate, we lose history, we lose culture, even the traces of our evolutionary patterns exhausting all the emotions of our humanitarian existence. Thankfully the realization of the same is pushing people towards the days of awareness. India Lost and Found is one such organization working towards the betterment of the heritage in India.

Indian government’s ideology when it comes to heritage is still just the continuation of the colonial policies and practices imposed on them by the british. The conservation guidelines followed in India by Archaeological survey of India were formulated by an English archaeologist John Marshal, the first Director General of Archaeological survey of India more than 100 years ago. While Archaeological survey protects just the “criteria- fit”  less than 4000 monuments, almost 80 % of other monuments lie in dismay, not protected under any central or state government. The list of unidentified and missing monuments is also considerable. Limited resources, half-hearted efforts and with the ravages of time, decay and encroachments, the past is getting erased with these rapidly vanishing heritage sites every day. 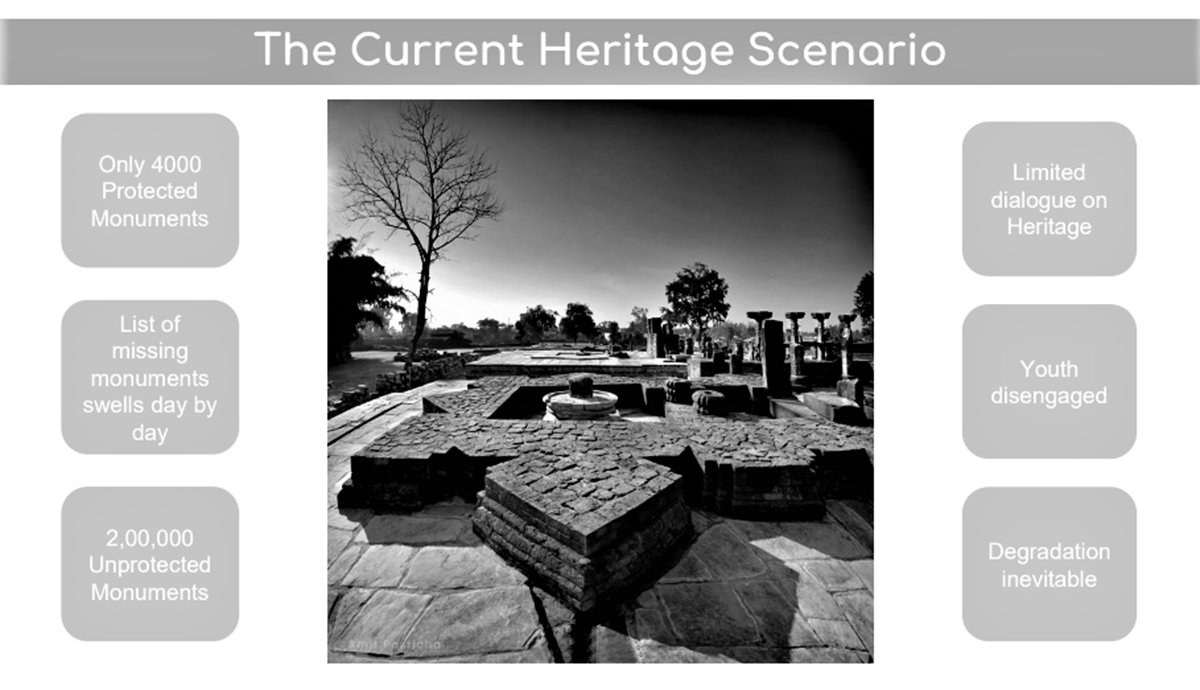 The founder Amit Pasricha, when asked about the challenges that were faced in the process, says “when we started collecting the information, most of the states didn't even have a ready list of the monuments under their jurisdiction. We had to go through a long and hard way to reach where we are today”.

India is a mammoth load of both people and heritage and its no hidden fact that managing all is not possible, specially for the government entities. What India Lost and Found is doing is sharing that heavy load of responsibility to bring a change in the typical practice.

India Lost and Found is a volunteer-based organization founded in 2018 by Amit Pasricha – known as the ‘panaromist’ photographer, due to his distinct style of creating beautiful panoramic frames.

Amit says that “I have a strong belief that photography is the most powerful languages that exist in today’s world, through which I have published many well-known books, all related to heritage and architecture only and with this expertise I wanted to do something which can bring a change in the current scenarios of how neglected our monuments stand”.

The organization aims to draw attention towards the fast depleting-built heritage of India with an intention to inspire the much-needed dialogue and awareness amongst the people, shedding light over splendid yet neglected part of India’s rich historic past. The dialogue about heritage is very limited and youth is considerably disengaged on the topic and the organization wants to involve and prepare youth as “future of the past” as a start and hopefully help in empowering the ignored local communities as stakeholders in conserving the heritage structures in their vicinity. 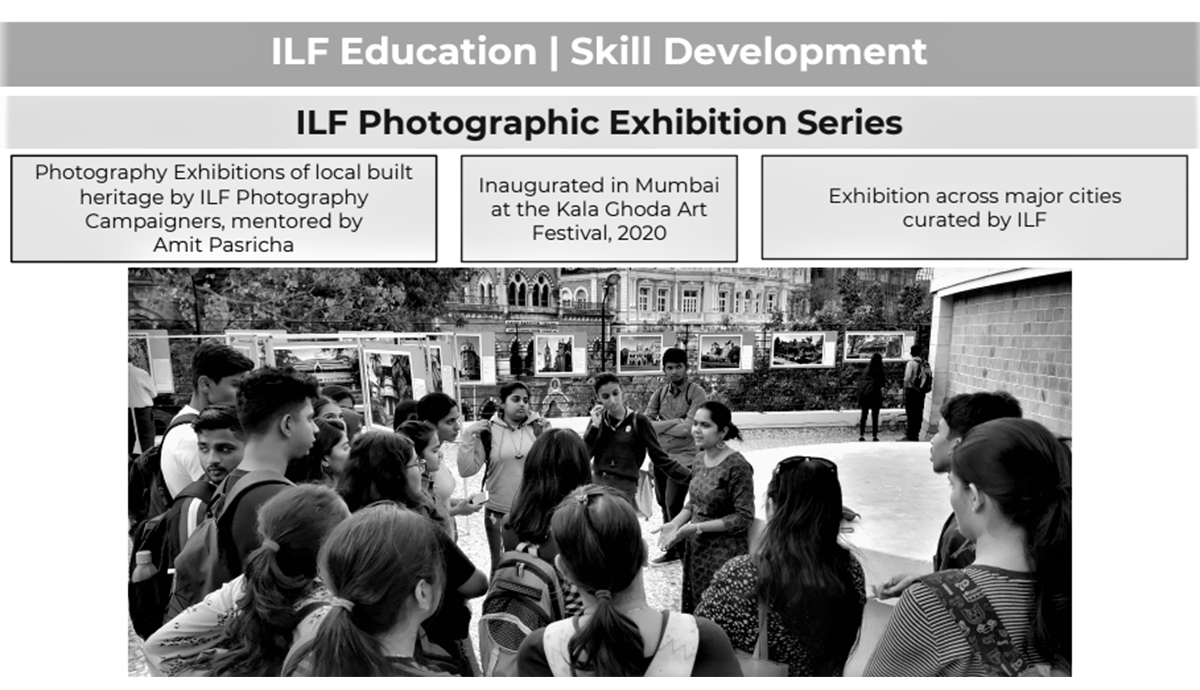 In the constantly fast-moving world of younger generation, it is very much important to be at the same page and move alongside them, be visible when they move and engage where they stop. Understanding the fact, India Lost and Found is evolving as a youth friendly organization, innovating the ways to involve them at each step of the way.

The ‘ILF Youth’ wing is constantly working with various colleges and young institutions to mobilize youth towards the initiative, widening their reach by launching many competitions and workshops. 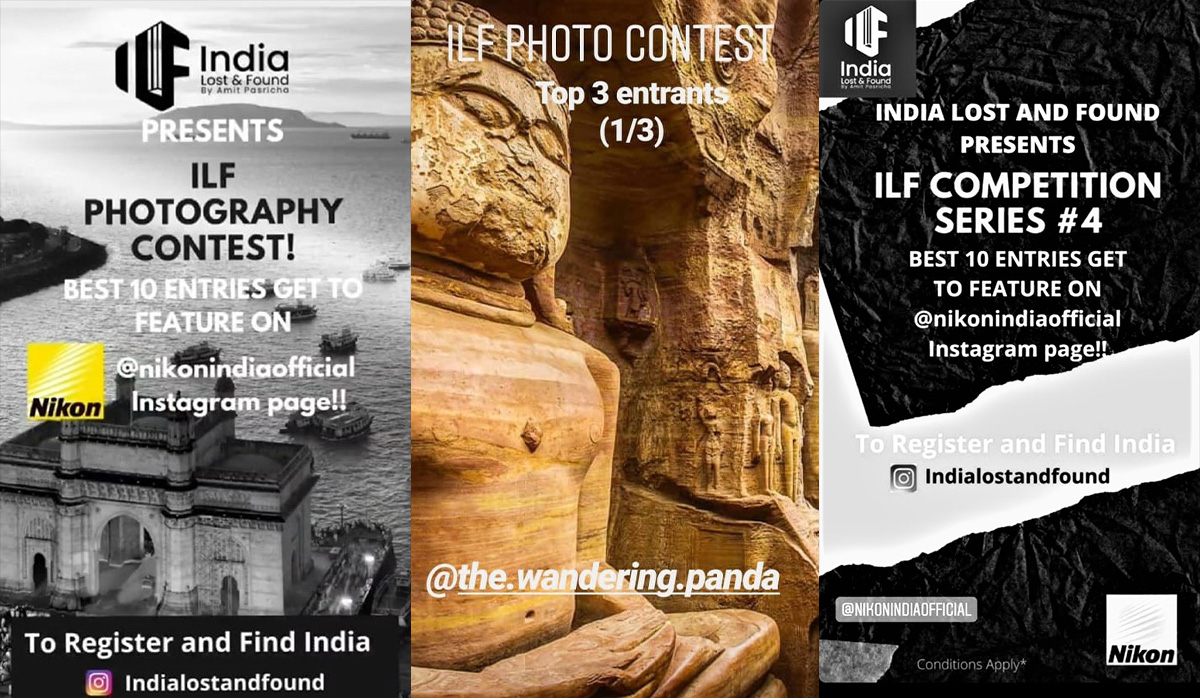 There is an active effort of initiating and engaging a dialogue with people through social media platforms like Instagram, creating quizzes, discussion forums over current developments in the field of heritage and conservation.

There are also regular photography competitions on different themes which are judged by Amit Pasricha himself live on the feeds, announcing winners online. Each of the department in the organization today consist 90% of youth.

They write, they animate, they research eventually leading, participating and taking the initiative forward. The organization also supports skill development and cultural education through different theoretical and practical mediums. Amit Pasricha himself is involved in mentoring and motivating students to express themselves through photography, also providing them a platform to present their work in exhibitions at different locations throughout India. 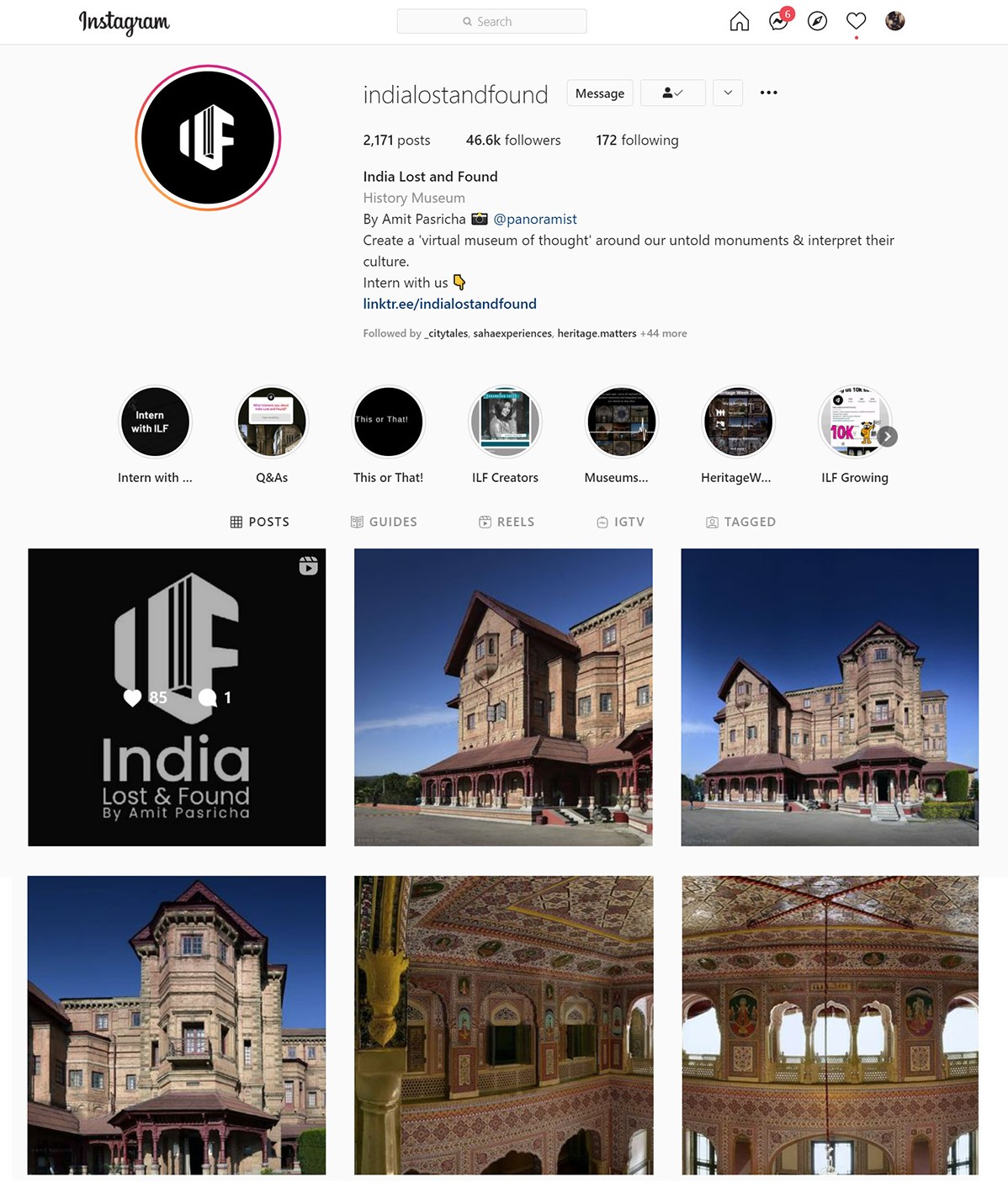 India Lost and Found has started a "talking through photographs" movement on its Instagram, drawing attention to lesser known ancient and modern heritage, the untold stories recited by the experts in the field of history and conservation.

There is no culture of “compartmentalizing heritage” on basis of age of the heritage structure. Each and every building which has some historical significance is being mapped without any discrimination, which is very much visible in the governmental setup. 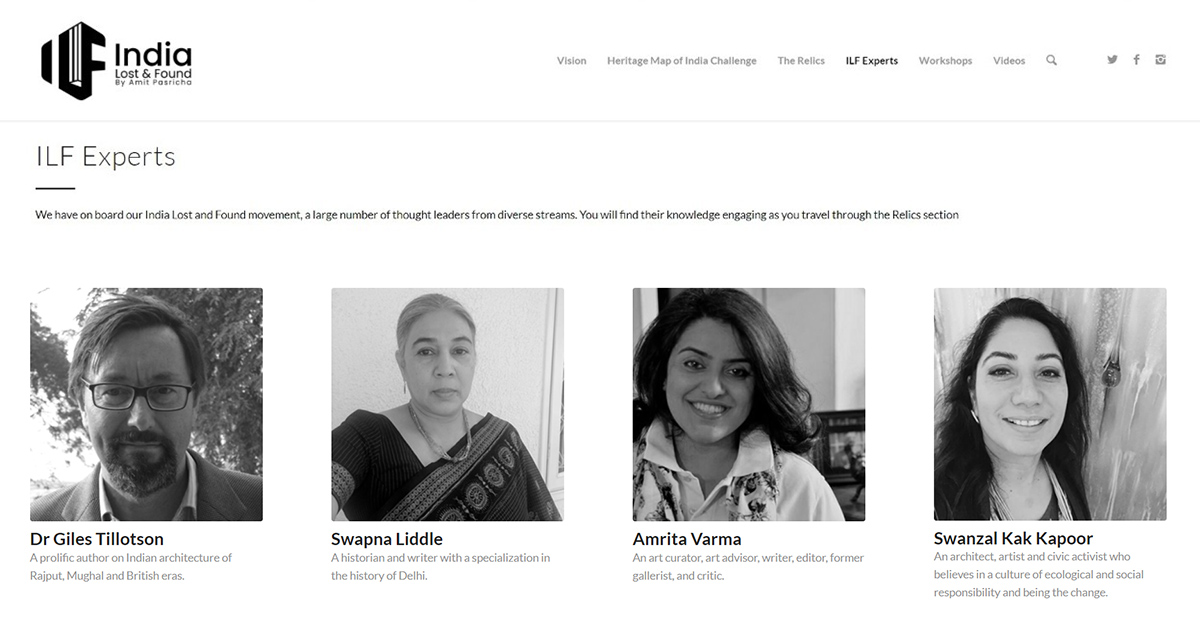 Instagram is the modern language of sharing and India lost and found intend to use it to the fullest. With a vast reach of social media platforms, these lullabies of the past reach thousands of readers, nationally and internationally. Instagram is also how the organization engages in a lot of activities, convey and converse. The ‘ILF Creator’ page introduces the people engaged with them in different capacities and departments, giving them proper recognition and credit for all the work they do. 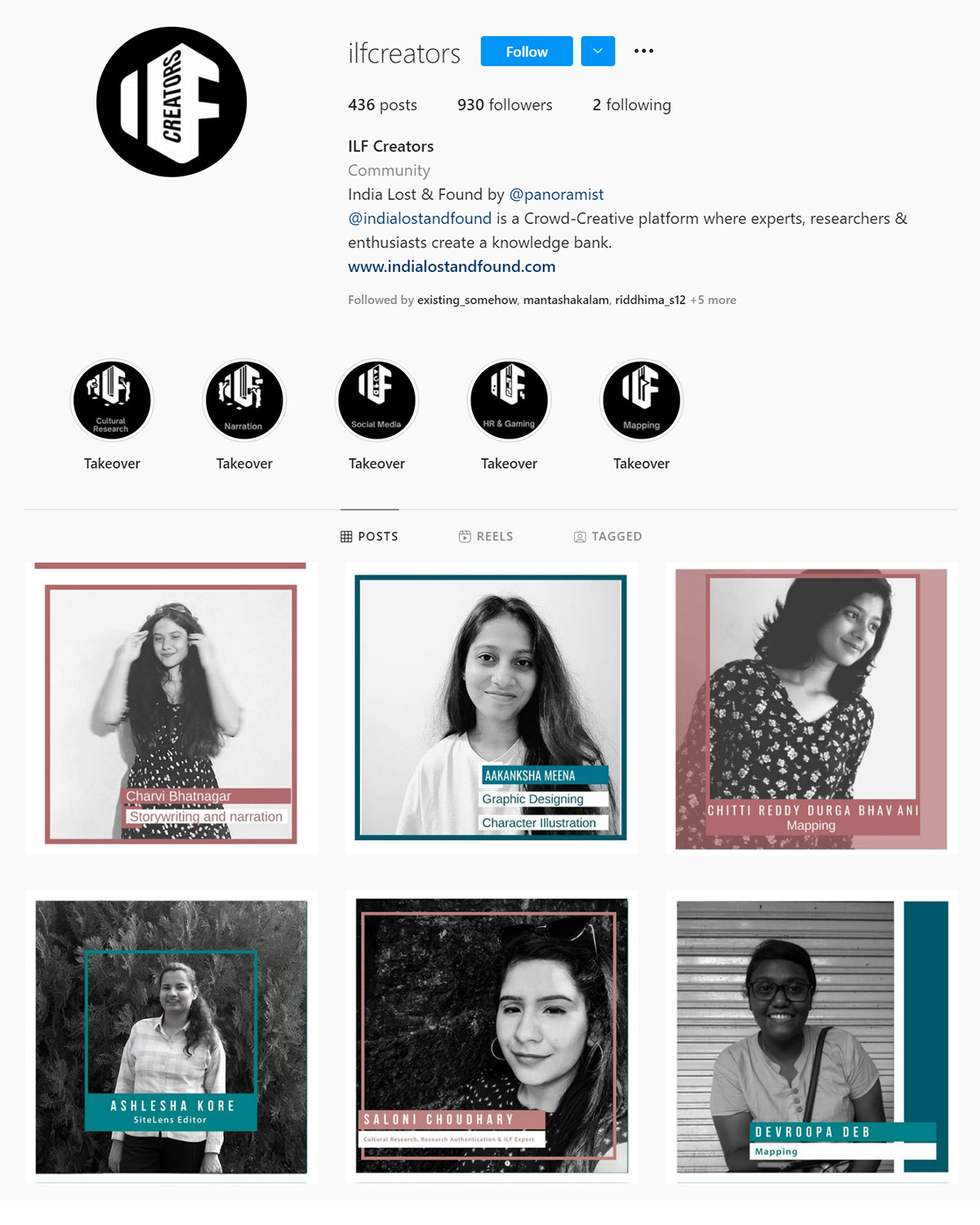 Major problems that the organization aims to tackle by the initiative are insufficient information about the lesser-known structures and inauthentic cooked up historical accounts related to the monuments which are spread by the random “guide culture” all over the country without an exception.

In the modern times where people do not have time to read voluminous texts about historic relevance of an edifice or simply see history as “boring”, the heritage map is being designed as a tool to grab the attention of the reader by providing interesting facts, whispered stories – real and imagined, and other little knowledge from here and there, told as a fascinating short story, romanticized to its core. Currently over 1000 people have come forward, devoting their time for the greater good of history. 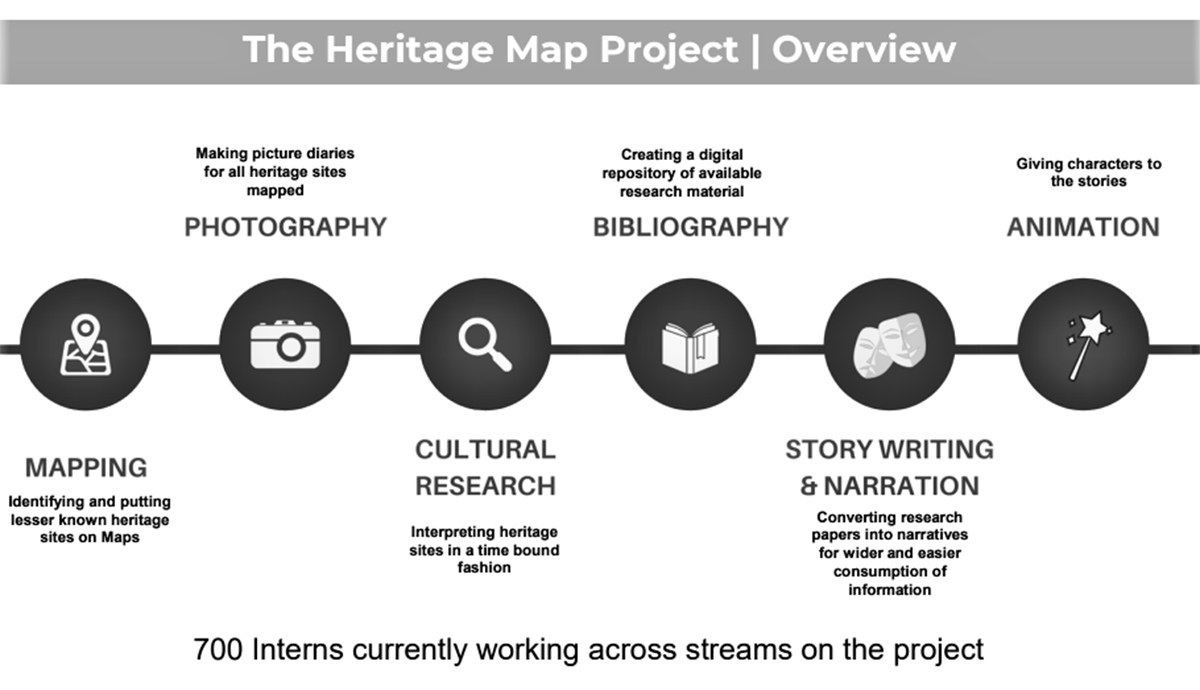 The database of all the information about individual sites is being collected through a pool of researchers, in a single document called "sitelens" for more than 10 states. The information cited in the sitelens allows the reader to create and walk along with a story of their own too, taking them back in time.

There is also an effort to engage people more creatively with the help of illustrated historic characters and voice over scripts of multiple characters from the folklores, providing as authentic glimpse of the past as possible.

There is an ongoing collection of over 5,000 resource materials in the India Lost and Found’s library which aims to improve the access of information possible through a digital archive in the near future.

The end goal is to develop a mobile application which would work as a virtual museum and tour guide both inbuilt with GPS taking the user around the historic neighborhoods in the cities along with the option of recorded commentary for ease of user.

Amit comments that "making this map is a huge responsibility, and it will easily take a decade to even make a little difference, maybe more. I don’t see it as some place we have to reach, rather as a continuous process of hard work and dedication."

All images courtesy of Amit Pasricha.

> via India Lost and Found