Broadacre City was Frank Lloyd Wright’s vision of a utopian metropolis, an orderly version — some would say omen — of the suburban sprawl that would ultimately spring up around American cities starting in the 1950s.

A 12-foot-square model of the city, completed in 1935 and first presented at Rockefeller Center that year, has long been viewed as Wright’s statement on the future, designed several decades before that future would arrive.

But curators and conservators are now learning that Wright kept tinkering with Broadacre City, adjusting the model to experiment with different structures right up until his death in 1959.

“The model was never finished,” said Barry Bergdoll, the acting chief curator of architecture and design at the Museum of Modern Art. “He never stopped working on it.”

The model is part of an exhibition at the museum through June 1 — “Frank Lloyd Wright and the City: Density vs. Dispersal” — a kind of coming-out party for a vast archive of Wright’s preparatory work, drawings, correspondence and writings that was acquired in 2012 from the Wright Foundation by MoMA and Columbia University’s Avery Architectural & Fine Arts Library. Researchers say the archive is already providing a deeper understanding of Wright’s work since the materials made the trek from Arizona and Wisconsin, where they had been little seen. 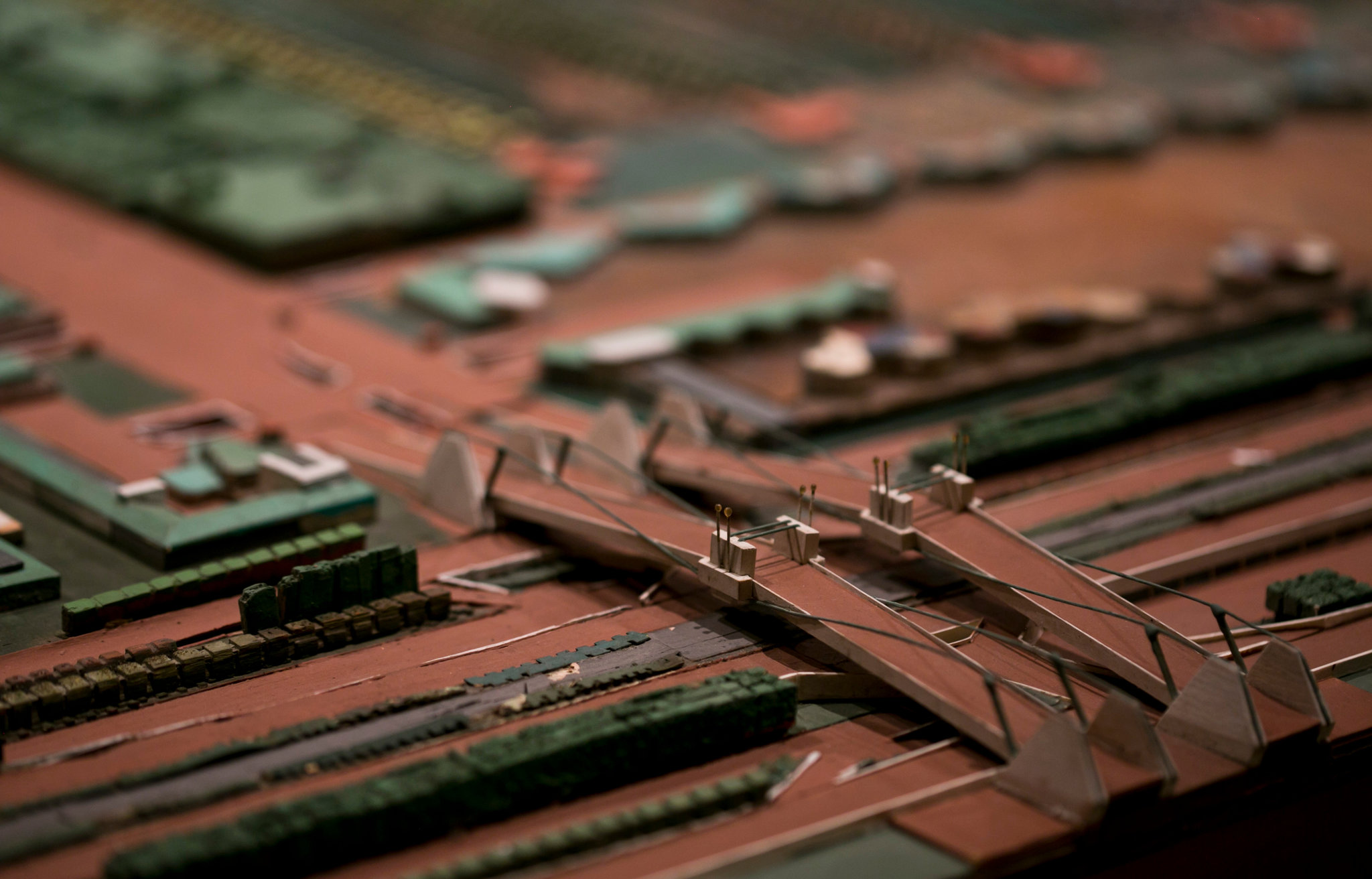 This model of Wright’s imagined Broadacre City, first displayed in 1935, is in a show at MoMA.CreditTodd Heisler/The New York Times

They noted that Wright’s model of the Guggenheim Museum, which is in the archive but not on display, differs from what was finally built on Fifth Avenue in Manhattan. The cylindrical portion of the building is positioned on the museum’s north instead of south side; a series of small, domed skylights encircle the large central dome, which were never realized; and there is more extensive interior landscaping, like planted balconies.

“Changes like this may have been caused by the client’s desires and/or Wright’s developing vision,” said Ellen Moody, a conservation fellow at MoMA. “More research is needed for interpretation. At these early stages, we are still uncovering the raw data. There are still thousands of photos and letters to go through in the archives, most of which aren’t organized.”

The collection poses quite a logistical hurdle, with about 27,000 drawings, including 835 for the Guggenheim alone. There are also more than 60 architectural models and building fragments, about 45,000 photographs, 2,400 manuscripts and more than 300,000 pieces of correspondence.

The material from Wright’s Taliesin homes in Spring Green, Wis., and Scottsdale, Ariz., filled two trucks, weighed 28,000 pounds and are now being inventoried.

“How do you group them?” said Janet Parks, Avery’s curator of drawings and archives. “How do you organize them in a way that makes sense, so you can tell people, ‘This is the last phase of the project,’ or, ‘These are the working drawings’?”

The foundation, which retains a monitoring role, decided to move Wright’s archive to other institutions to guarantee a high level of conservation and access, and to transfer the considerable financial burden of maintaining the archive.

Much of the material is delicate; architectural models were not originally meant to last. “They are often made as quick conceptual ideas that then become valuable at a later date,” said Jim Coddington, MoMA’s chief conservator. “Therefore, they’re often quite fragile.”

In preserving the models, the conservators must decide which version to restore: The model in its original form? Its final form? The building as it looked when completed?

“There are multiple histories that one can choose to preserve,” Mr. Coddington said. “The evolving history of Broadacre is a reflection of the evolution of Wright’s ideas.”

In consulting historic photographs of Broadacre City models, for example, conservators noted that a block of rectangular residences had been replaced with pinwheel-shape buildings, a style Wright used only about a decade after the Broadacre model was built.

“You get a glimpse into his thought process,” Ms. Moody said. “You look at models, and you see differences.”

The model — made of wood, paint, paper and particle board — had to be thoroughly cleaned with special vacuums and damp sponges, having spent seven decades uncovered and in uncontrolled climates. Many of its features were loose or splitting from the wooden base.

“We went over it inch by inch,” Ms. Moody said.

The Broadacre model had been restored in 1994, when many missing elements were replaced or their footprints were painted over. In the current restoration, Ms. Moody replaced a series of repeating carved wooden buildings with resin copies fabricated by casting molds from extant buildings, making them easier for future conservators to recognize as replacements.

Although Broadacre was never built, the model served as an important testing ground for Wright, featuring a public parking structure whose spiraling design anticipated the Guggenheim, conceived some 20 years later.

MoMA and Avery Library hope that having better access to this material will encourage people to rediscover and re-examine Wright afresh: “to bring him out of his own foundation into a discussion with broader currents historically and issues that are burning today,” said Mr. Bergdoll, who organized the current show with Carole Ann Fabian, the Avery Library’s director. “There are many new ways to ask questions about well-known material and less well-known material.”

The exhibition is just a start. A larger show is planned for 2017, the 150th anniversary of Wright’s birth.

In exploring him over the next few years through his artifacts — which include items as detailed as a doodle on a Plaza Hotel cocktail napkin — MoMA and Avery expect to learn considerably more about him, particularly given how much an examination of Broadacre alone has revealed.

“It seemed like he was using the model to experiment; it wasn’t really a finished product,” Ms. Moody said. “That reflects his obsession with this idea — that he continued to work on the model after it was completed.”

The model stayed at Taliesin in Wisconsin until Wright’s death, “so he had ample opportunity to fuss with it,” she added. “He lived with it until the end.”